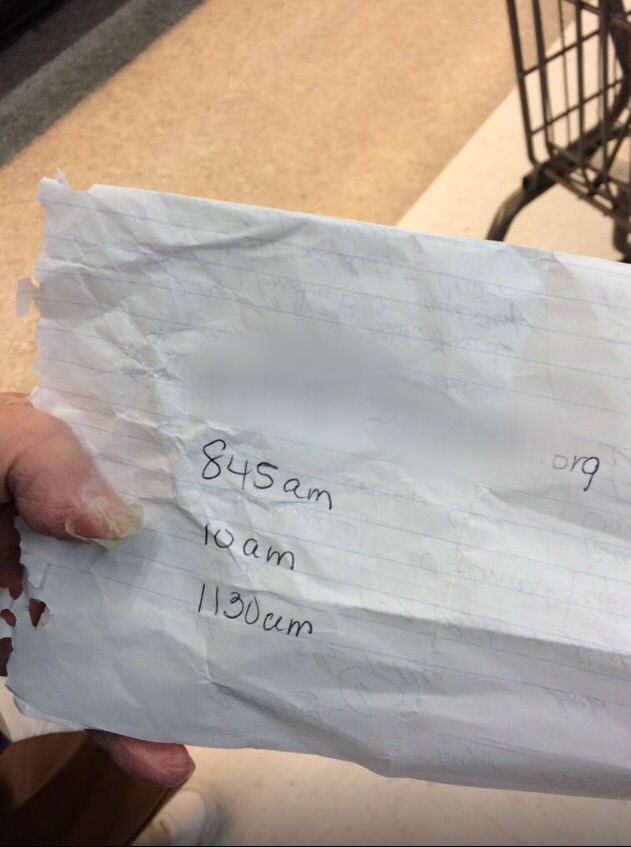 Our son decided he want to bake his own chocolate cheesecake from scratch for his 11th birthday. A presumably lofty idea with the exception that he nailed the cranberry cheesecake he made from scratch for the holidays, a few short weeks before. In the middle of this feat, we realize he’s shy a few ingredients which warrants a trip to the supermarket. A trip I did not want to take.

Walking very fast through the aisles (as usual) it’s pretty obvious that I’m in a rush. A short, elderly woman is standing in front of the refrigerator. Her and her cart full of everything in the store was blocking an ingredient we needed. Endowed with good manners out the wazoo (’cause my momma wasn’t havin’ it), I kept it very polite. Still watching grass grow in front of my item, she then noticed my son’s hair. We are used to our locs, (frequently referred to as dreadlocks) being fascinating to those unfamiliar with our hair texture. She noticed that we both had the same kind of hair style. I noticed that her and my son were the same height and that now both of them were in my way…

Endowed with good manners (’cause I ain’t havin’ it) my son keeps it very polite. “His birthday is tomorrow and he’s making his own cheesecake!” I blurted out like projectile vomiting coupled with a frazzled warm smile as though that would make them both move faster.

“A cheesecake you say? *Bill loves cheesecake. Let me see if I can guess your age!” Ok so now we’re at the local carnival, you’re both in my way and who is Bill?!

“Yes!”, my son and I exclaimed with glee! Wait we don’t win a prize for her guessing correctly. Lady we gotta go!

Her face lit up as she began to engage with our son. The deeply embedded wrinkles that encased her faint smile lines retreated from her face like the tight bun pulling her hair back. Like gold in ‘dem there hills I discovered life in ‘dem there blue eyes of hers.  We manage to pull away and bid farewell.

You’ve been there. When you run into the same person in every aisle of the supermarket. The first time you see them it’s understandable. The second time, awkward. The third, annoying. The fourth, just plain weird. This was a huge Super Walmart and it’s unusual to run into the same person this much! We had reached the “just plain weird” stage with our new friend but I began to feel a familiar tugging on the inside I could not ignore.

Every round went higher. With every meet and greet she offered another unsolicited clue. Bill was her husband who not only liked cheesecake but couldn’t remember that he did. It had become increasingly difficult for her to know what to cook for him anymore, even after 50 years of marriage. He rarely spoke and when he did his words were calloused enough to increase the distance between them, though living in the same home.

When she mentioned her son who is serving overseas in the military, her eyes began to dim again. For the first time I stopped to listen. It was then that I realized this divine appointment was one I could no longer reschedule.

I thanked her son for his service to our country vicariously through our hands that were now touching. Her hands didn’t shake when I held them and I became the sponge and sounding board she didn’t know she needed. It was cold where we stood. If I had only caught the revelation earlier in the cereal aisle, we wouldn’t be freezing in this aisle. Customers began to walk around us as though we were planted displays. With every passerby looking at us, the odd couple, holding hands, *Ms. Alice’s prayer list grew. I was holding hands that still played piano but longed to hold grandchildren who her daughter in law didn’t bring around nearly enough.

I mentioned my faith gave me strength and she asked if I went to church and if so where. When I told her the name of my church, she couldn’t believe that our family made the 55 minute trip there. “And that’s without traffic!”, she squealed!

“Yes ma’am! And it’s worth it every time!” Her eyes regained life and her pale cheeks rosied up.

“Well that’s too far for me to drive”, she said to herself aloud. Her face now intense as though trying to figure out the last word on a crossword puzzle. “Can I stream online?!”, she asked as though she remembered where she left her house keys after a frantic search. Though it’s wrong to judge a book by its cover, I admit I did not take her for the internet savvy type!

She happened to have pen and paper  amidst tissue and peppermint in that giant pocketbook of hers. Grandmothers always seem prepared don’t they? I wrote down our church’s website address and included the service times on a folded sheet of paper. I then asked her permission to take a picture of her hand holding the paper as a bit of a souvenir. As internet savvy as she was, she seemed bewildered that my phone could take photos!

We ended in prayer, shivering from the cold but warm from our embrace.

Turns out, I wasn’t at the supermarket to get anything…I had been sent there to give.

Unauthorized use and/or duplication of this material without express and written permission from this blog’s author and/or owner is strictly prohibited. Excerpts and links may be used, provided that full and clear credit is given to Ericka Arthur and authenticitee with appropriate and specific direction to the original content.